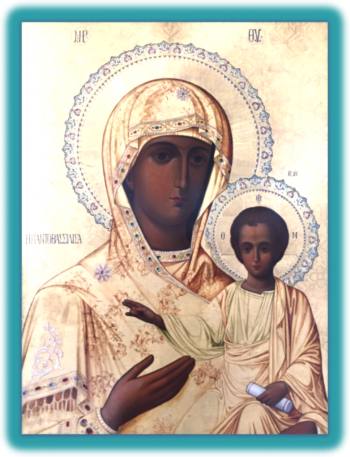 Our holy icon of the Theotokos and Ever-Virgin Mary portrays her as the Panagia Pantovasilissa (Holy Mother Queen of All). It is a reproduction from an ancient Byzantine icon, which existed among others in the monumental Church of the Holy Wisdom (Agia Sophia)  in Constantinople. It is said to have been one of four icons that the Evangelist Saint Luke painted. According to tradition, before Constantinople fell to the Turks, in 1453, the holy icons of Agia Sophia were dropped into the sea to prevent their desecration or destruction at the hands of the invaders. The holy icon of the Panagia Pantovasilissa was found on the coast of Asia Minor on the shore of a town called Triglia. Following a series of miracles and other wonders, the Christians moved it to the historic Byzantine abbey that existed in the town. The abbey was then converted into a church of the Holy Mother and named Panagia Pantovasilissa, after the icon through which the community had been blessed with wonders. The holy icon was later adorned with silver by individual gifts, and was constantly used in worship by the inhabitants of Triglia. For centuries the icon stood in Triglia, bestowing miracles upon the faithful.

In the 20th century, however, things changed. In 1922 the citizens of Triglia, as well as many others, were driven from their homes and their villages by the Turks, in what came to be known as the Asia Minor Catastrophe.The sacred icon of the Panagia Pantovasilissa, through which Christ's blessings had flowed, was once again saved, and was consequently entrusted to the Byzantine Museum of Athens, Greece. Later a group of former inhabitants of Triglia resettled in a town called Rafina, in Greece. They built a new church, and they named it Panagia Pantovasilissa, after the icon through which their ancestors had received Christ's blessings since the time of the Roman Empire. It is in this church, in Rafina, Greece, where the original sacred icon of the Theotokos, Panagia Pantovasilissa is today. In the first half of the 20th century, some of the refugees from Triglia fled to America rather than Greece. They settled in Lexington, KY, and they too wanted to preserve the legacy of their ancestors, by turning to the Theotokos who had guided their community through the ages. In 1948, after years of preparation, these refugees built a church which, like the one in Rafina, they named after the sacred icon. The holy icon present in our church was written in 1956, at the Abbey of Karayae on the Holy Mountain of Athos, in Northern Greece, by the Hieromonk Seraphim Oftalmopoulou.

Holy Mother Queen of All GOC